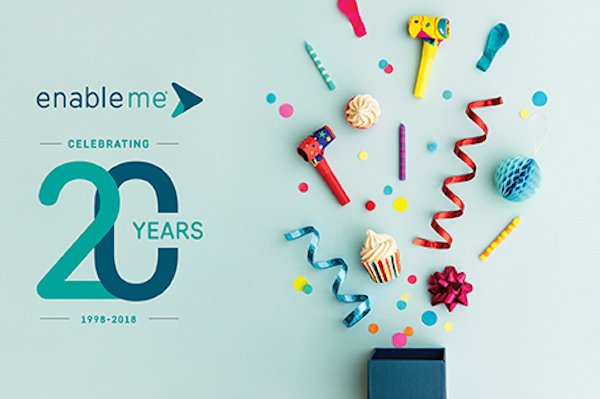 When Mike Laky first started Enable Me, there were few options for people recovering from a stroke, living with multiple sclerosis, spinal cord injury or traumatic brain injury. Today, as Enable Me celebrates its 20th anniversary, Laky is proud of the role his company has played over the past 20 years in helping people regain their independence following those illnesses or injuries.

Laky, president of Enable Me, founded the company as MSL Associates, Inc., on Jan. 2, 1998, to bring a better quality of sales and service to the complex rehab market, and he has accomplished that and more. Enable Me now has a direct sales force in 28 states, serving 70% of the nation’s population, and independent sales representatives in other states.

Laky’s passion for helping people regain mobility came from personal experience. “My mother had a severe stroke in the mid-1980s,” he said. “She had been a very outgoing woman, very sociable. But after her stroke, she did not want to be as social anymore. She stayed inside the house. It was difficult to know how to help her. Most of the technology we have now did not exist then.”

Twenty years ago, Laky met scientists who were researching neuroplasticity – the brain’s ability to reorganize itself by forming new connections – but at that point, it was simply research. Now that research has become proven science, and the science has led to the creation of new therapies.

“There is now clinical evidence that repetitive therapy helps build new neuro pathways and neuroplasticity. We want to bring new independence to the nearly 7 million* stroke survivors in the United States,” he said. Although doctors have long said the first six months after a stroke were the most crucial in terms of rehabilitation, research now shows that therapy can help stroke patients continue to improve for years.

“Independence. That’s often what you lose after a stroke,” Laky said. “After a stroke, you may lose independence, because you can’t do things like you used to. Cognitive abilities also may be affected. Helping people restore mobility, function and cognitive abilities not only gives them their independence back, but also it is a huge help to caregivers. Meaningful technology can bring a lot of relief to everyone involved.”

Today, Enable Me imports cutting-edge technology such as bionics, robotics, sensory-driven solutions, functional electrical stimulation and visual-perceptual technologies from around the globe in an effort to give people a more normal life and especially, to restore mobility and independence. Enable Me is the exclusive U.S. distributor of RECK MOTOmed®, Hasomed FES®, VELA, the REX Bionic System, and Bike Labyrinth. Many of the products may be used at home.

As Enable Me embarks on its third decade, Laky said, the company will focus on the customer experience and the renovation of its own campus. “We are very customer-focused, and we want to take that experience to the next level. We will continue to home in on neurological rehabilitation.”

He added, “We will stay focused on simple, safe and effective therapies.”

Later this year, Enable Me will expand and renovate its existing campus to include a technology showroom, an education center and a studio to produce live podcasts for training and education. The company is hiring additional team members to assist with the expansion.

“We are really excited about the future,” Laky said. “We know we are in the right position with the right partners. We know that robotics and the use of exoskeletons are going to grow quickly over the next five years worldwide. Enable Me experienced 23% growth in 2017.”

He said, “It is an honor to be involved with technologies that truly change people’s lives for the better.”

*According to the National Stroke Association