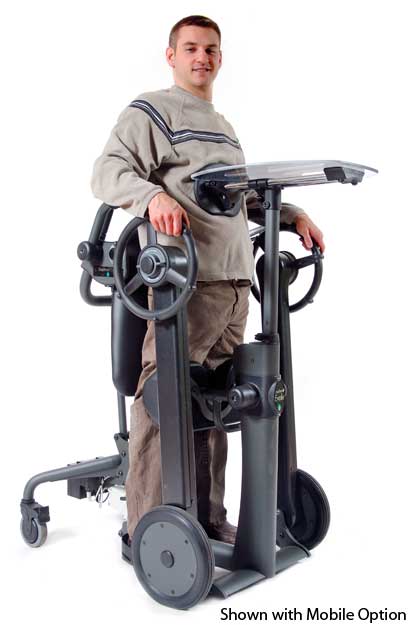 I was recently asked to do an in-service for a Spinal Cord Injury Group on the Benefits of Standing. The in-service was scheduled to last for 30 minutes, it easily lasted twice that long. We spoke about several benefits of standing on the human body including: improved range of motion, deceased joint and muscle contractures, improved strength, decrease in muscle spasms, and reduced swelling in the lower extremities. However, the one benefit that seemed to get the most attention is the positive psychological impact that standing provides.

When we can do something like standing every day with little to no thought we tend to take it for granted. How many times have you been at a restaurant waiting to be seated or at an event and it seems like you are the only one without a seat? I know I have had this happen to me more than once. You feel like the odd one out as the only one standing and having to look down at everyone you speak to. Now imagine it was the other way around. What if you were dependent on a wheelchair for mobility, constantly having to look up at everyone you speak to? Imagine always feeling like the odd one out. After a while it can start to have a very negative psychological impact.

There is a lot of equipment out there today that can help people stand and remain in that position, but not as many that allow you to remain mobile while in the standing position. One of the pieces of equipment I represent does just that. Once an individual is transferred into the Evolv Mobile Stander, it can bring a person from a seated position to standing and has a wheel that can be turned (like hand pedaling a bicycle) that allows the person to move about the space they are in. This can all be done by the individual using the equipment without additional assistance after the initial transfer.

Everyone started talking about how amazing it would be to be able to stand up when friends or family came over. There were many interesting individuals and all had touching stories, but one in particular sticks out in my mind. There was a young man in the group in his mid-twenties. He lived over half of his life having full control over his lower body. Then in his late teens as a result of one life altering incident he found himself dependent on a wheelchair for mobility and unable to stand without assistance. He started sharing a story with the group about how his wife would always send him and his friends to the garage when they wanted to socialize, stating “if we want to have a beer and a cig, it’s off to the garage”.

The only problem with this scenario is that his garage does not have any couches or chairs. This means everyone else is standing around and he spends the evening with his head bent back. He was thrilled at the prospect of being able to stand in the garage when his friends came over. He got into the Evolv Mobile Stander and staring cruising around the room for a bit, with all eyes were on him. Suddenly he stopped, looked up and blurted out “Not only could I roll up to the bar…with this tray on here I could BE THE BAR”!

It doesn’t get any better than that!